Home » What’s The Number At The Bottom of My Plastic Water Bottle?

Rumors have gone around that the number indicated on the bottom of your water bottle lets you know how many times you can reuse it. WRONG!!

The numbers actually indicate what plastic material the bottle is made of. Each number identifies the specific uses for any type of plastic-based product, from plastic wrap to yogurt containers.

Numbers 1 and 2 plastics should only be used once – No refilling.

DOWNLOAD: Read the HealthObservatory.org article
to see what each number means.

HAVE YOU HEARD OF BPA?
Bisphenol A (BPA) is a chemical found in many types of plastics.

According to the National Institute of Health: “BPA gets into our bodies when we eat or drink foods from containers made with BPA. Most plastic containers arena’t made with BPA, but it’s often found in a strong, see-through plastic called polycarbonate. (Polycarbonate containers with BPA usually have a #7 recycling symbol on the bottom, although not all plastics marked with

#7 contain BPA.)  Scientists know that tiny amounts of BPA can leach out of these containers into foods and drinks.”

Some studies suggest that exposing the plastics to high temperatures can cause more BPA to seep into foods.

A recent study by the U.S. Centers for Disease Control and Prevention found that more than 90 percent of Americans age 6 and older have detectable levels of BPA in their urine.

A report from National Toxicology Program, released in September 2008, expressed “some concern” about BPA’s potential effects on infants, children and fetuses. Animal studies suggests that BPA exposure before adulthood can affect the brain, behavior and prostate gland. 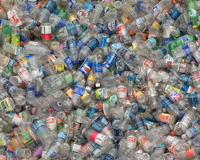 Let’s face it, we can’t change the world over night. If you’re ready to get your tenants started on a recycling program and practicing sustainability, let the experts at Metroclean help you lead the way.

We can help you start a recycling program for plastic, paper, aluminum, toner cartridges and batteries. Give Lesli Mann, Director of Business Development a call at (713) 255-0100 or lmann@metrocleanonline.com.